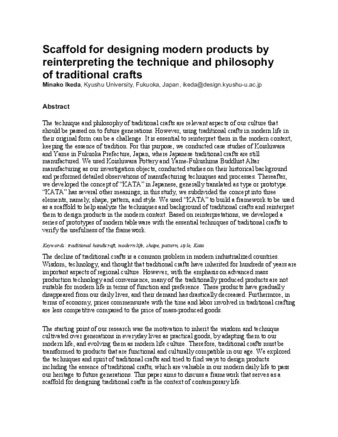 The technique and philosophy of traditional crafts are relevant aspects of our culture that should be passed on to future generations. However, using traditional crafts in modern life in their original form can be a challenge. It is essential to reinterpret them in the modern context, keeping the essence of tradition. For this purpose, we conducted case studies of Koishiwara and Yame in Fukuoka Prefecture, Japan, where Japanese traditional crafts are still manufactured. We used Koishiwara Pottery and Yame-Fukushima Buddhist Altar manufacturing as our investigation objects, conducted studies on their historical background and performed detailed observations of manufacturing techniques and processes. Thereafter, we developed the concept of “KATA” in Japanese, generally translated as type or prototype. “KATA” has several other meanings; in this study, we subdivided the concept into three elements, namely, shape, pattern, and style. We used “KATA” to build a framework to be used as a scaffold to help analyze the techniques and background of traditional crafts and reinterpret them to design products in the modern context. Based on reinterpretations, we developed a series of prototypes of modern tableware with the essential techniques of traditional crafts to verify the usefulness of the framework.