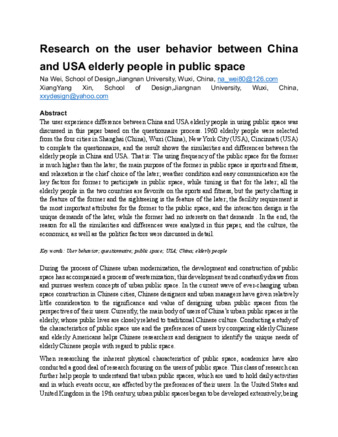 The user experience difference between China and USA elderly people in using public space was discussed in this paper based on the questionnaire process. 1960 elderly people were selected from the four cities in Shanghai (China), Wuxi (China), New York City (USA), Cincinnati (USA) to complete the questionnaire, and the result shows the similarities and differences between the elderly people in China and USA. That is: The using frequency of the public space for the former is much higher than the later; the main purpose of the former in public space is sports and fitness, and relaxation is the chief choice of the later; weather condition and easy communication are the key factors for former to participate in public space, while timing is that for the later; all the elderly people in the two countries are favorite on the sports and fitness, but the party chatting is the feature of the former and the sightseeing is the feature of the later; the facility requirement is the most important attributes for the former to the public space, and the interaction design is the unique demands of the later, while the former had no interests on that demands. In the end, the reason for all the similarities and differences were analyzed in this paper, and the culture, the economics, as well as the politics factors were discussed in detail.