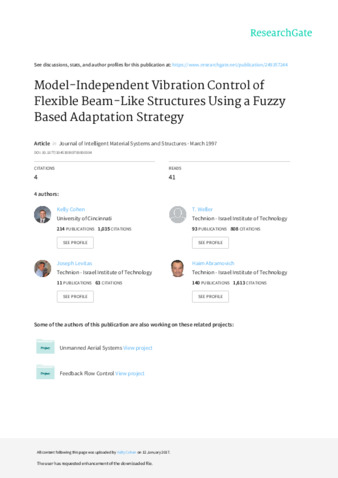 The present study deals with an AFCA (Adaptive Fuzzy Control Algorithm) for an Euler-Bernoulli approximation of a two-dimensional version of a cantilever beam-like orthogonal tetrahedral space truss. Transient disturbances, modeled as a unit impulse, excite all the modes of the beam. The resulting transverse displacement at the free end of the beam and its corresponding rate are observed by sensors placed there, and active control of the beam is provided by a collocated force actuator.

A design methodology for the closed-loop control algorithm that is independent of an exact mathematical model (space-state model, F.E.M., etc.) of plant dynamics and which is based on fuzzy logic is presented. First, the behavior of the open-loop system is observed. Then, the control force applied to the system emulates the behavior of a dynamic vibration absorber which is tuned to the measured fundamental frequency. This approach not only assures inherent stability associated with passive absorbers, but also circumvents the phenomenon of modal spillover. The damping and the mass ratios of the absorber adapt themselves by using a fuzzy decision-making process. This results in relatively quick settling times, low overshoots and dying out of vibration within a few seconds.

When the control force is turned off after a mere 16 seconds, almost all the vibrational energy is dissipated. In addition, the performance of the AFCA is insensitive to varying initial conditions. To demonstrate the robustness of the control system to changes in the temporal dynamics of the cantilever beam, the transient response to a considerably perturbed plant is simulated. The Young's modulus of the beam was raised as well as lowered substantially, thereby significantly perturbing the natural frequencies of vibration. The mode shapes, however, remain unchanged. For these cases, too, the AFCA provides similar settling times and rates of vibrational energy dissipation.

Permanent link to this page: https://scholar.uc.edu/show/bc386t31h