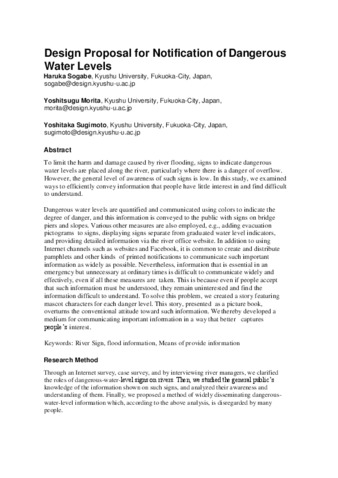 To limit the harm and damage caused by river flooding, signs to indicate dangerous water levels are placed along the river, particularly where there is a danger of overflow. However, the general level of awareness of such signs is low. In this study, we examined ways to efficiently convey information that people have little interest in and find difficult to understand.

Dangerous water levels are quantified and communicated using colors to indicate the degree of danger, and this information is conveyed to the public with signs on bridge piers and slopes. Various other measures are also employed, e.g., adding evacuation pictograms to signs, displaying signs separate from graduated water level indicators, and providing detailed information via the river office website. In addition to using Internet channels such as websites and Facebook, it is common to create and distribute pamphlets and other kinds of printed notifications to communicate such important information as widely as possible. Nevertheless, information that is essential in an emergency but unnecessary at ordinary times is difficult to communicate widely and effectively, even if all these measures are taken. This is because even if people accept that such information must be understood, they remain uninterested and find the information difficult to understand. To solve this problem, we created a story featuring mascot characters for each danger level. This story, presented as a picture book, overturns the conventional attitude toward such information. We thereby developed a medium for communicating important information in a way that better captures people’s interest.