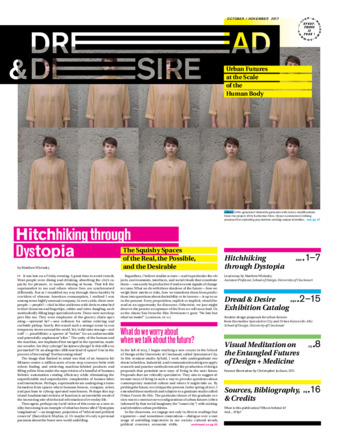 It was late on a Friday evening. A great time to avoid crowds. Most people were dining and drinking, absorbing the city’s capacity for pleasure, or maybe relaxing at home. That left the supermarket to me and others whose lives are synchronized differently. But as I stumbled my way through those harshly lit corridors of obscene American consumption, I realized I was among some highly unusual company. In every aisle, there were people—people?—clad in blue uniforms with devices attached to their forearms and fingertips, cables and wires dangling, each methodically filling large specialized carts. These were not shoppers like me. They were employees of the grocery chain operating— operated by?—new software for online ordering and curbside pickup. Surely, this wasn’t such a strange scene in contemporary stores around the world. Yet, it did raise strange—radical? — possibilities: a specter of “before” for an unforeseeable and potentially unpleasant “after.” The unity of the human and the machine, not implanted but merged in the operation, made me wonder: Are they cyborgs? Incipient cyborgs? Is this still a supermarket? Or an altogether different kind of space? One in the process of becoming? But becoming what?

The image that flashed to mind was that of an Amazon fulfillment center: a million acres of non-stop conveyor belts with robots finding and retrieving machine-labeled products and filling yellow bins under the supervision of a handful of humans. Robotic automation creating efficiency while eliminating the unpredictable and unproductive complexities of human labor and interactions. Perhaps, supermarkets are undergoing a transformation from spaces where humans browse, compare, select, and purchase to cyborg-operated warehouses. Perhaps this rapid and fundamental revision of function is an inevitable result of the increasing rate of technical reformation of everyday life.

Then again, perhaps my lucid vision of this scene as a new-reality- becoming is an example of what has been called “dystopian imagination”—an imaginary projection of “ethical and political concern” [Baccolini & Moylan, 2]. Or maybe it’s only a personal paranoia about the brave new world unfolding.

Permanent link to this page: https://scholar.uc.edu/show/v405s940m