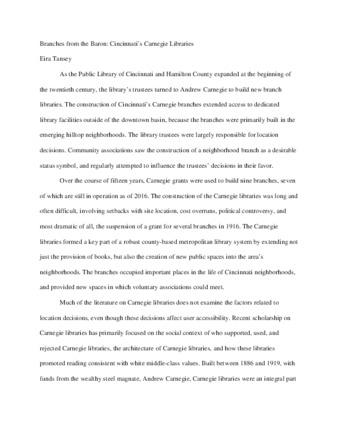 As the Public Library of Cincinnati and Hamilton County expanded at the beginning of the twentieth century, the library’s trustees turned to Andrew Carnegie to build new branch libraries. The construction of Cincinnati’s Carnegie branches extended access to dedicated library facilities outside of the downtown basin, because the branches were primarily built in the emerging hilltop neighborhoods. The library trustees were largely responsible for location decisions. Community associations saw the construction of a neighborhood branch as a desirable status symbol, and regularly attempted to influence the trustees’ decisions in their favor.