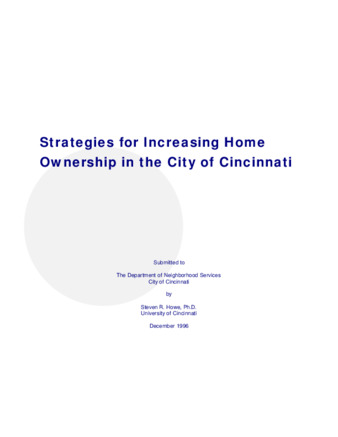 The best explanation for Cincinnati’s low home ownership rate is that the topography of the city encouraged dense development involving multiple-unit structures up until World War II. When the highway programs of the post-war period opened up the suburbs to development, the city was already built-out and could not compete for new single-unit construction that the federal government was subsidizing on a massive scale.

In the last 50 years, the Hamilton County suburbs have gained 140,000 owners while the number of owners in the city has decreased by 1,000. As a result, the home ownership rate in the Cincinnati metropolitan area is greater than the national rate for areas of comparable size (63 percent versus 61 percent) while the rate in the city is far less than the national rate.

The City of Cincinnati faces a number of challenges in any effort to increase its home ownership rate. Government programs in other cities typically produce dozens of units a year, not the hundreds of units that Cincinnati needs to produce. In order to achieve even a modest increase in home ownership, the city will have to alter market forces in the direction of increased supply of housing suitable for owner-occupancy and increased demand for home ownership.

In order to increase its rate of home ownership to 41 percent by the year 2010, the City of Cincinnati needs to adopt a four-part strategy:

Increase the Supply of Units
The market cannot produce new units on its own. The city needs to assemble and prepare sites in order to reduce the additional costs associated with building in the city as opposed to the suburbs. City Hall must continue to eliminate barriers to development and provide new services to builders. Cincinnati will not be able to increase the number of middle-class owners without creating new neighborhood areas with the appropriate mix of amenities. At the lower end of the owner-market, the city needs to move aggressively to convert abandoned structures into units people will want to buy and rehabilitate.

Help Renters Become Owners
While converting renters to owners is an essential component of an overall strategy, the City of Cincinnati must recognize that not everyone can be an owner and target its resources appropriately. The city does not have unlimited funds to change the cost equation of owning a home and will, therefore, have to learn from other cities how to work with lending institutions to increase the flow of dollars under Community Reinvestment Act initiatives. Other cities have had some limited success with programs to convert people renting duplex and condo units into owners. The city needs to increase the availability, extent and quality of education and counseling programs.

Attract New Households to the City
The city has to market its neighborhoods, and in some cases, smaller areas within neighborhoods. This will require market research, training programs for Realtors, investments in street furniture, increased services, publications extolling city neighborhoods, and programs comparable to the Living in Cleveland program. The city needs to start working cooperatively with the Cincinnati Public Schools. Specific market niches in which the city can hope to compete very successfully include the empty nesters, the gay and lesbian community, first time buyers, and people interested in downtown living.

Maintain the Existing Pool of Owners
About 75 percent of the time a home owner in Cincinnati sells and buys another home in the Cincinnati area, the home purchased will be in the suburbs. The city must create opportunities for the home seller to move up without moving out of the city.

In addition to the above strategies, which involve the central city market, the City of Cincinnati needs to actively promote strategies that will help slow the rate of suburbanization and that will create low income housing opportunities in the suburbs. If suburbanization continues at the current rate, and if the city continues to be the governmental unit with de facto responsibility for low income housing, there is every reason to wonder if there is anything that the city can do to increase its rate of home ownership.

Permanent link to this page: https://scholar.uc.edu/show/gh93h078b