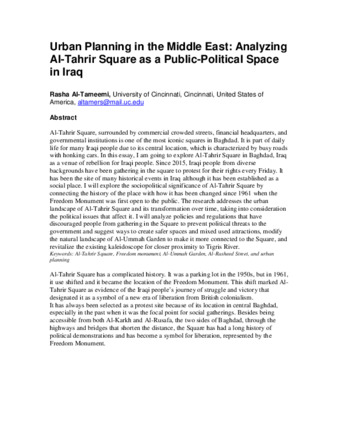 Al-Tahrir Square, surrounded by commercial crowded streets, financial headquarters, and governmental institutions is one of the most iconic squares in Baghdad. It is part of daily life for many Iraqi people due to its central location, which is characterized by busy roads with honking cars. In this essay, I am going to explore Al-Tahrir Square in Baghdad, Iraq as a venue of rebellion for Iraqi people. Since 2015, Iraqi people from diverse
backgrounds have been gathering in the square to protest for their rights every Friday. It has been the site of many historical events in Iraq although it has been established as a social place. I will explore the sociopolitical significance of Al-Tahrir Square by
connecting the history of the place with how it has been changed since 1961 when the Freedom Monument was first open to the public. The research addresses the urban landscape of Al-Tahrir Square and its transformation over time, taking into consideration the political issues that affect it. I will analyze policies and regulations that have discouraged people from gathering in the Square to prevent political threats to the government and suggest ways to create safer spaces and mixed used attractions, modify the natural landscape of Al-Ummah Garden to make it more connected to the Square, and revitalize the existing kaleidoscope for closer proximity to Tigris River. Keywords: Al-Tahrir Square, Freedom monument, Al-Ummah Garden, Al-Rasheed Street, and urban planning

Al-Tahrir Square has a complicated history. It was a parking lot in the 1950s, but in 1961, it use shifted and it became the location of the Freedom Monument. This shift marked AlTahrir Square as evidence of the Iraqi people’s journey of struggle and victory that
designated it as a symbol of a new era of liberation from British colonialism. It has always been selected as a protest site because of its location in central Baghdad, especially in the past when it was the focal point for social gatherings. Besides being
accessible from both Al-Karkh and Al-Rusafa, the two sides of Baghdad, through the highways and bridges that shorten the distance, the Square has had a long history of political demonstrations and has become a symbol for liberation, represented by the Freedom Monument.